Went down for a wander at a local nature reserve today Cliburn Moss, here's some info : http://www.naturalengland.org.uk/ourwork/conservation/designatedareas/nnr/1006039.aspx

Its one of those places which just grab you instantly, it felt like I was in Scotland, and looks like a perfect place for Red Squirrels although I didn't see any. Walking through the large Scots Pine and Birch brings a sense of silence and create a strange natural atmosphere, as I walked a grabbed a few Bilberry to munch on.

Where I pulled in to park up, the field opposite had been ploughed and held large numbers of Woodpigeon and Pheasant. The conifers above also held Goldcrests. In the reserve Wren, Dunnock, Blackbird, and Jays were present. There was quite a few Bat boxes on site.

As the path left the reserve it opened up to a disused railway line, heavily lined with Hawthorns. A mixed flock of Greenfinch and Linnet were floating about in the maize, as I watched a Juv Sparrowhawk made an attempt at the flock, then carrying on along the space between one row and the next until it reached an old crooked oak in the centre of the field, another was heard calling nearby. A large flock of Tits past through, containing, Blue Tit, Great Tit, Coal Tit, Long-Tailed Tit, Robin, and a lone Chiff Chaff.

A Musket flew over the maize and headed for the same crooked Oak landing in it out of sight, as I began to leave I heard the characteristic sound of Carrion Crows mobbing something I turned round to find a Common Buzzard leaving from the same crooked Oak!

1 Great Spotted Woodpecker and 2 Stock Doves were also about.

At the opening of the entrance there was a large amount of these, I think they are Devil's-bit scabious Succisa pratensis. Would like to here what other people think. 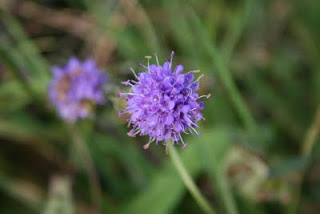 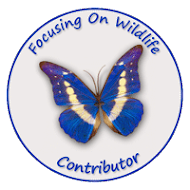